The Roman baths were far more than just public bathhouses…They were an architectural and engineering wonder of their time, an integral part of the Empire…They were social meeting places, where the political strategies, plots and counter plots, all the intrigue of life in the Roman court were really conducted and decided upon…Here, besides getting clean, using saunas and steam and cooling rooms to cleanse themselves, political allies could get together in small groups and plan their latest intrigues and schemes in relative privacy in a lush backdrop of architectural splendor….

A prominent element of city life in the Roman Empire, the baths were well known and completely accepted as places where people came not only to clean themselves but also to socialize and spend leisure time…The baths were so central to Roman culture that they were one of the first constructions the empire erected to Romanize the places it conquered…. 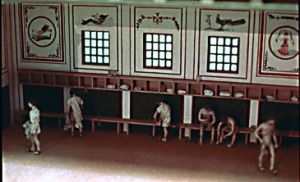 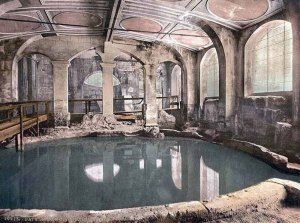 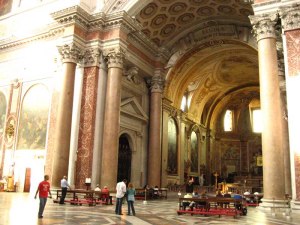 Bathing played a major part in ancient Roman culture and society. Bathing was one of the most common daily activities in Roman culture, and was practiced across a wide variety of social classes. Though many contemporary cultures see bathing as a very private activity conducted in the home, bathing in Rome was a communal activity.

The Romans emulated many of the Greeks bathing practices, Romans surpassed the Greeks in the size of their baths. As in Greece, the Roman bath became a focal center for social and recreational activity. As the Roman Empire expanded, the idea of the public bath spread to all parts of the Mediterranean and into regions of Europe and North Africa.

With the construction of the aqueducts, the Romans had enough water not only for domestic, agricultural, and industrial uses, but also for their leisurely pursuits. The aqueducts provided water that was later heated for use in the baths. Today, the extent of the Roman bath is revealed at ruins and in archaeological excavations in Europe, Africa, and the Middle East. 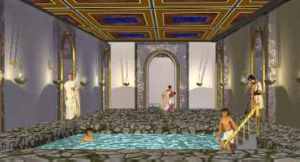 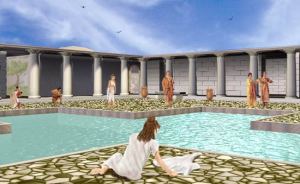 These Roman baths varied from simple to exceedingly elaborate structures, and they varied in size, arrangement, and decoration. In taking a Roman bath, the bather induced sweating by gradually exposing himself to increasing temperatures. To accommodate this ritual, all Roman bathhouses contained a series of rooms which got progressively hotter.

After the bather stored his clothes, he progressed into a cold room with its tank of cold water, then a warm room, and finally a hot room. After taking this series of sweat and/or immersion baths, the bather returned to the cooler room for a massage with oils and final scraping with metal implements. Some baths also contained a dry, resting room where the bather completed the process by resting and sweating.

The layout of Roman baths contained other architectural features of note. Because wealthy Romans brought slaves to attend to their bathing needs, the bathhouse usually had three entrances: one for men, one for women, and one for slaves. The preference of symmetry in Roman architecture usually meant a symmetrical facade, even though the women’s area was usually smaller than the men’s area because of fewer numbers of patrons. Usually solid walls or placement on opposite sides of the building separated the men’s and women’s sections.

Thus, the Romans elevated bathing to a fine art, and their bathhouses physically reflected these advancements. The Roman bath, for instance, included a far more complex ritual than a simple immersion or sweating procedure. The various parts of the bathing ritual,(undressing, bathing, sweating, receiving a massage, and resting), required separated rooms which the Romans built to accommodate those functions.

After a morning’s work, most Romans enjoyed spending the afternoon at the thermae or public bath. They were a social meeting place. Men and women enjoyed coming to the baths not only to get clean but to meet with friends, exercise, or read at the library. The baths had hot and cold pools, towels, steam rooms, saunas, exercise rooms, and hair cutting salons. They had reading rooms and libraries, as among the freeborn, who had the right to frequent baths, the majority could read. Children were not permitted.

In some ways, thermae resembled modern-day spas. The Romans raised bathing to a high art as they socialized in these communal baths. Courtship was conducted, as well as sealing business deals, as they built lavish baths on natural hot springs. Such was the importance of baths to Romans that a catalog of buildings in Rome from 354 AD documented 952 baths of varying sizes in the city.

The baths often included, aside from the three main rooms listed above, a palaestra, or outdoor gymnasium where men would engage in various ball games and exercises. There, among other things, weights were lifted and the discus thrown.

Men would oil themselves (as soap was still a luxury good and thus not widely available), shower, and remove the excess with an instrument called a strigil…. Often wealthy bathers would bring a slave that carried his master’s towels, oils, and strigils to the baths and then watched over them once in the baths, as thieves and pickpockets were known to frequent the baths

In many ways, baths were the ancient Roman equivalent of community centers. Because the bathing process took so long, conversation was necessary. The modern equivalent would be a combination of a library, art gallery, mall, restaurant, gym, and spa. The Romans believed that good health came from bathing, eating, massages, and exercise. The baths, therefore, had all of these things in abundance. Since some citizens would be bathing multiple times a week, Roman society was surprisingly clean. 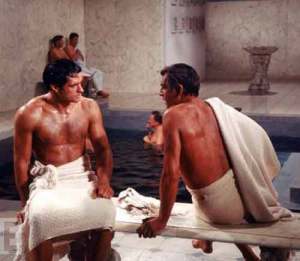 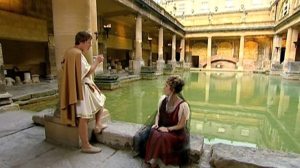 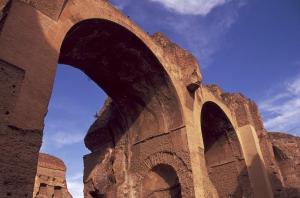 The Baths of Caracalla were Roman public baths, or thermae, built in Rome between AD 212 and 216, during the reign of the Emperor Caracalla. The complex of buildings was more a leisure center than just a series of baths. Besides being able to hold an estimated 1,600 bathers, it also featured a public library and a wrestling school. The baths remained in use until the 6th century when the complex was sacked by the Ostrogoth’s during the Gothic War, destroying the hydraulic installations.

When asked by a foreigner why he bathed once a day, a Roman emperor is said to have replied “Because I do not have the time to bathe twice a day.”

Tomorrow, we will compare the Roman fondness for cleanliness with the medieval Europeans of the Middle Ages that followed them….The contrasts will, shall we say, take your breath away….

For more articles by John Whye, click on http://www.johnwhye.com@wordpress.com