Dolphins are nature’s most endearing mammals, they are like clowns, they always seem to be laughing and smiling and they have entranced, beguiled and fascinated people for centuries….One dolphin “Flipper” even had his own TV show! They are also perhaps the most intelligent of the creatures of the deep, and certainly the most intriguing…Dolphins are mammals, not fish, and they must make frequent trips to the surface of the water to catch a breath…Like all mammals, they have lungs, and are warm blooded creatures….

They give birth to their young live rather than laying eggs like gill breathing fish, and and they feed their young with milk…The blowhole on the top of a dolphin’s head acts as a “nose” making it easy for the dolphin to surface for air…They are related to the great Orca “killer whales” I posted a blog about yesterday, and they spend their entire lives under the water…(They are sometimes confused with porpoises, but that is a different species)… 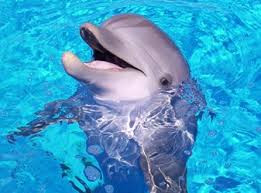 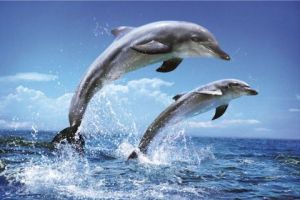 In fact this peculiar friendliness dolphins possess has endeared them to humans… “Wild dolphins of some species are noted for seeking out social encounters with humans. The phenomenon of lone sociable dolphins — for whom human contact appears to substitute for the company of their own kind — is documented extensively in the scientific literature. There is no doubt that these animals are exhibiting inquisitive behavior, which lends weight to the idea that dolphins do in fact seek out human contact with some regularity.

One might go so far as to say it constitutes irrefutable evidence: apparently wild dolphins can have an affinity for humans. There have also been accounts of lone dolphins occasionally acting aggressively toward people, but whether they are being malicious or simply over playful is hard to determine…They are, after all, wild animals and we should not anthropomorphize them (attributing  human form or other characteristics to beings other than humans) because of their seemingly friendly traits and behavior as similar to human actions and reactions, like we do with our dogs and cats, which are thoroughly domesticated animals…

As one of the favorites among wildlife watchers, dolphins are best known for their agility and playful behavior creating a beautiful sight as they leap from the water. Part of the toothed whale family that also includes pilot whales and Orcas, dolphins are highly intelligent and sociable marine mammals that can found in nearly every corner of the globe.

Tending to inhabit shallow areas of tropical and temperate waters, dolphins can be found throughout the world in every ocean, except the coldest ones. Most dolphins prefer to inhabit waters along the coastline and near the ocean’s continental shelf edges. However, habitat range and migration for dolphins is highly dependent on the water depth, sea surface temperature, distance from shore, and available food.

With a very varied diet depending on feeding opportunities and species type, dolphins mostly consume fish, squid, shrimp, and other crustaceans. Since dolphins have a compartmentalized stomach for rapid digestion, they do not chew their food and will instead swallow fish whole headfirst or breaking larger fish by rubbing them on the ocean floor. 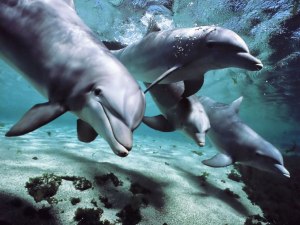 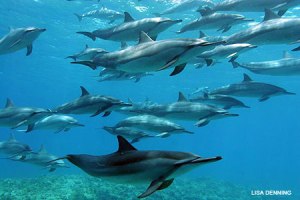 As active predators, dolphins commonly eat around four to five percent of their body weight in food each day and nursing mothers will take in even more at eight percent. Similar to bats, dolphins use echolocation to navigate the waters and hunt for their prey by bouncing high-pitched sounds off objects to listen for any echoes. Usually, the sociable mammal will hunt in groups by surrounding a school of fish, trapping them, and taking turns catching them.

Rarely seen independently, five to several hundred dolphins may live and travel together in a cohesive long-term social group known as a pod. Establishing strong social bonds with one another, behavioral studies have found that dolphins prefer association with each other and mother-calf bonds are long-lasting as the calf stays with the mother until six years of age. Dolphins enjoy chasing one another, carrying objects around, tossing seaweed, and jumping as high as 16 feet from the surface of the water. 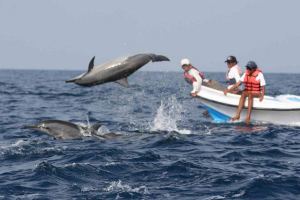 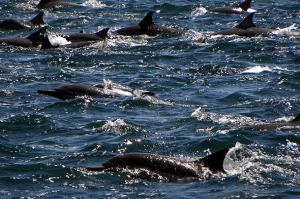 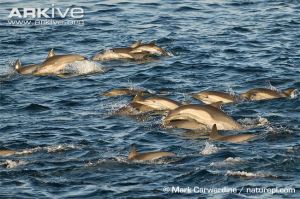 In addition to swimming in pods with dolphins of their own species, the animals can also be seen interacting with toothed whales and other dolphin species as well as riding the pressure waves of humpback whales. In order to conserve energy, dolphin pods swim alongside ships in a practice called bow-riding. Responding to sharks with both avoidance and aggression, dolphins have a tendency to attack and sometimes even kill tiger sharks in the wild.

When you think about it, it’s remarkable what a connection we as a culture (if not as a species) have made with dolphins. They are seen as friendly, spiritual, healing, mystical. At the very least, cheerful. All this from an animal that is so incredibly different from us….

A belief in dolphin telepathy is also common…Again from my Google sources: “Reports from telepathically sensitive individuals in controlled situations in America and Russia as well as from limited documented findings from US Naval research, strongly indicate telepathic ability in dolphins…It seems reasonable to hypothesize that dolphins are telepathic”….

Here’s a fun fact about dolphins too, You’ve seen it in Flipper and other popular culture stories; dolphins rescuing humans from drowning or sharks, keeping them safe from harm. But does it really happen? The answer is, surprisingly often! Here are just a few examples, culled from my Google sources: 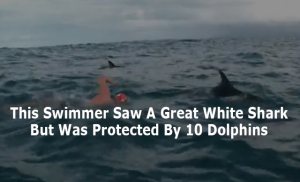 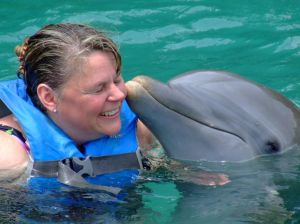 “In 2004, a group of swimmers were confronted by a ten-foot great white shark off the northern coast of new Zealand. A pod of dolphins “herded” them together, circling them until the great white fled.”

And “In another case in the Red Sea, twelve divers who were lost for thirteen and a half hours were surrounded by dolphins for the entire time, repelling the many sharks that live in the area. When a rescue boat showed up, it appeared that the dolphin pod were showing them where the divers were; they leaped up in the air in front of the rescuers, jumping toward the lost people as if to lead the boat onward – as, according to old stories, they often did with endangered ships in treacherous water.” Why, only the dolphins know…

Or another: “Four swimmers were saved from a great white shark by a pod of altruistic dolphins, who swam in circles around them until the humans could escape. Rob Howes, a British-born lifeguard, had gone swimming with his daughter, Niccy, and two of her friends off Ocean beach near Whangarei on the North Island, New Zealand, when the dolphins suddenly appeared. At first, he thought the mammals were being playful, but he soon realized the danger the swimmers were in”….

“They started to herd us up, they pushed all four of us together by doing tight circles around us,” Mr Howes told the New Zealand Press Association. He tried to drift away from the group, but two of the bigger dolphins herded him back – just as he spotted a three-meter great white shark heading towards him. “I just recoiled,” he said. “It was only about two meters away from me, the water was crystal clear and it was as clear as the nose on my face. They had corralled us up to protect us. The dolphins kept their vigil for 40 minutes until the shark lost interest, and the group could swim 100m back to the shore”….

Fascinating stories, and the fact is that we are not the only intelligent species on this planet…Only our overwhelming human pride and arrogance has led us to believe that we are superior to all the other creatures on the planet…After all, the earth is ¾ ocean and only ¼ land…

Maybe back in those primeval days when the first amphibians took their initial tentative steps onto the shore and out of the ocean, they set in motion a chain of events that ended up leading to the evolution of life on the surface, right up to the present day evolution of humanity….

Maybe, even way back then, the dolphins were the smart ones who chose to stay in the ocean! It’s one of those questions that make you go hmmmm…I guess, the truth is, you just never know!