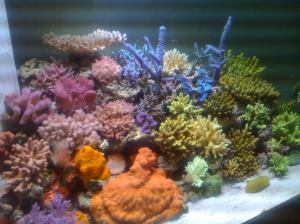 I was visiting the Fisherman’s Wharf area at Pier 39 with my family, my daughter and grand daughter on Monday and right before we began our visit on the S.S. Pampanito, a real United States navy WWII submarine, a genuine artifact from another time and place and a popular tourist attraction, when random fate struck down our plans….I mean the exact same moment, the actual minute we were buying our tickets, we were shocked and unexpectedly denied entrance to the boat because of a sudden inexplicable power outage in this heavily traveled tourist area…

Pier 39 and the Fisherman’s Wharf area is one of the most famous and heavily congested tourist trap of attractions in the entire city of San Francisco…I have been going there , on and off, for over 50 years, and this has NEVER happened…A total blackout! Luckily it was mid afternoon, so there was still plenty of daylight, but shop after shop, block after block, the stores that sold souvenir tee shirts and coffee mugs and refrigerator magnets with the “I

As it turned out, the whole weird incident was triggered by a totally freakish, completely unexpected source….The outage was caused by a helium Mylar balloon that somebody, probably a small child, had released, probably by accident….The Mylar balloon then floated free style until it came into contact with overhead power lines several miles away from Pier 39, at the corner of Filbert and Leavenworth…. The local power company, PG & E stated that roughly 8,000 people were affected by the unexpected outage, which lasted for several hours…

It just goes to show you that the smallest things can set into motion a whole chain of events, like the butterfly effect…. According to my Google sources, “In chaos theory, the butterfly effect is the sensitive dependence on initial conditions in which a small change in one state of a deterministic nonlinear system can result in large differences in a later state.

The name of the effect, coined by Edward Lorentz is derived from the metaphorical example of the details of a hurricane (exact time of formation, exact path taken) being influenced by minor perturbations such as the flapping of the wings of a distant butterfly several weeks earlier.”

I know, I know, it all sounds pretty far fetched, but then again, it actually DID happen, and it happened to me, just an average Joe out for a little sightseeing with his family…To me the ramifications of the butterfly effect and the whole chaos theory just reinforces my long held belief about the inter- connectivity of all things on this planet earth we all share….

I mean, EVERYTHING is related to, and has a significant effect on, everything else….You can apply this logic to the food chain and it stands up, from the smallest plankton on the ocean floor all the way up to the whales…You can apply it to the weather system and it holds up, and all these nay sayers about the negative impact of green house gases affecting the very air we breathe are all nuts, if you ask me…

The English physicist Sir Isaac Newton said it years ago: “For every action, there is an opposite and equal reaction.The evidence is right in front of all of our eyes, with all the bizarre, non-traditional weather patterns that have affected the entire planet the last few years! Profits can never be excused as an excuse to upset the ever so delicate balancing act of Mother Nature, the greedy, obscenely rich members of the 1%, who control 99% of the world’s wealth, be damned and blasted, because everything IS truly connected…We cannot let these environmental idiots ignore results and reactions in the name of profits to make them even richer…

It may seem like a small thing, sure, what happened to me, a one time temporary blackout caused by a freak accident, and I agree that particular incident was an aberration, that rarely ever happens…But that is just the point, it DID happen! And it also proves the larger point, that anything can happen to anybody at any time, because we are all so inter-related and connected that it not the exception that proves the point; the exception IS the point!”

And to tempt fate by intentionally messing with planetary wide systems like cutting down huge swaths of the Amazon rain forest, (sometimes referred to as the lungs of the planet), the release of industrial pollutants contributing to the greenhouse effect on world wide weather patterns, messing with the food chain itself by dumping pollutants into the oceans…This is not only suicidal, it is downright criminal!

If this criminally insane behavior pattern continues, we will all end up in the same situation as the players in that old Grateful Dead song, “Morning Dew”: